Why don’t you want to kill mould?

Mould spores and hyphae (roots) will fragment into hundreds of toxic particles when killed. When inhaled these ultrafine and nano particles, and the toxins residing on them, trigger the innate immune system which sees them as Pathogen-associated molecular pattern (PAMPs) (Berndtson, 2016. Biotoxin Pathway 2.0). Killing mould spores could also make them produce more mycotoxins and other defense mechanisms such as microbial VOCs as they die.

So in all respects you actual increase the toxin and inflammagen load when you kill, rather than remove, mould.

Substances that kill mould and other microbes are known as antimicrobials or biocides.

There’s a huge disconnect between Indoor Environmental Professionals (IEPs) and mould remediators who follow best practice industry standards and most news or blog articles on the internet and many government agencies, even those quoting mycologists and other “experts”.

What is a water-damaged building?

According to Dr. Shoemaker’s studies a building is considered water-damaged when it has any one of the following:

I would add the following

What should you do instead?

The caveat here is that if you have more than a small amount of surface only mould growth then you should consult with an IEP and if required a professional remediator. An IEP will write up a remediation scope of works for the remediator to follow.

Make sure the IEP/remediator follow the IICRC S520 at a minimum and give them the Surviving Mold IEP consensus statement for them to follow. See the References section for where I’ve sourced my information. 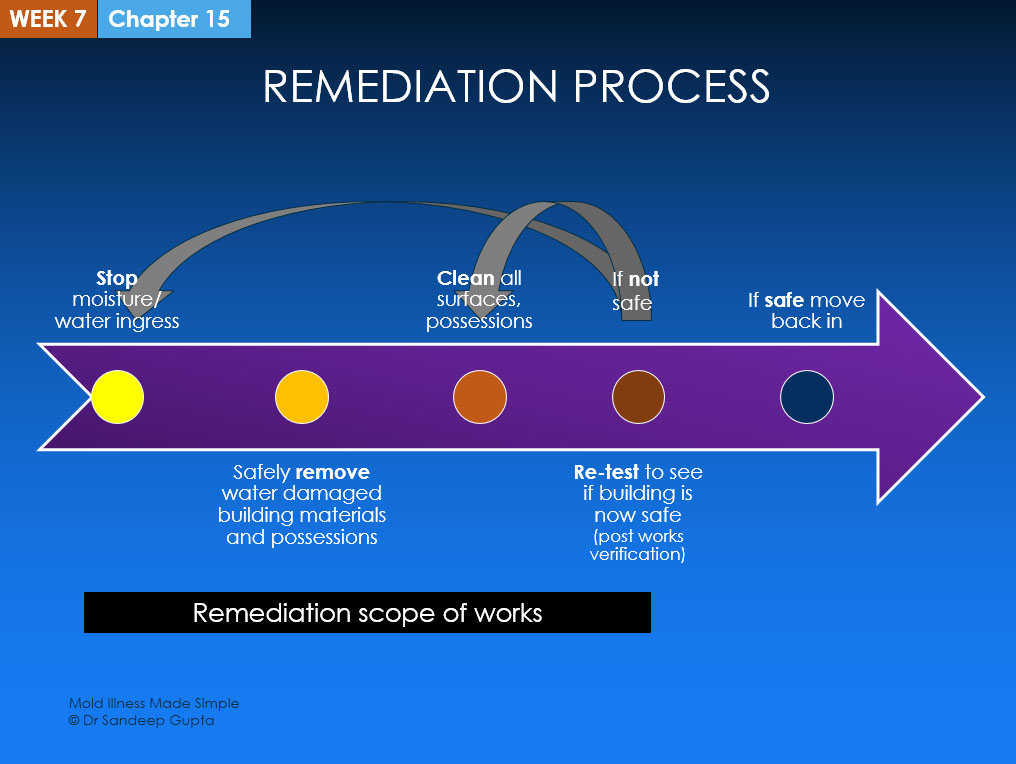 Step 1. Stop the moisture
Simply put moisture = mould. You first have to stop the moisture problem that’s causing the mould growth to begin with. Fix the leak, repair the roof, stop the condensation build up etc. Without this step mould will continue to reappear. This step also includes drying of all water damaged materials
Step 2. Remove porous building materials safely
If porous buldings materials are water-damaged and/or mouldy they will need to be removed and disposed of safely, using containment that can include plastic sheeting, negative air pressure and HEPA air scrubbers. These materials may need to be replaced, generally after the remediation process.

Step 3. Clean and dry all surfaces

This process is for all surfaces – ceilings, walls, floors and cupboards/wardrobes – except carpets, which is a whole other blog post. Make sure surfaces are fully dry before going to the next stage. 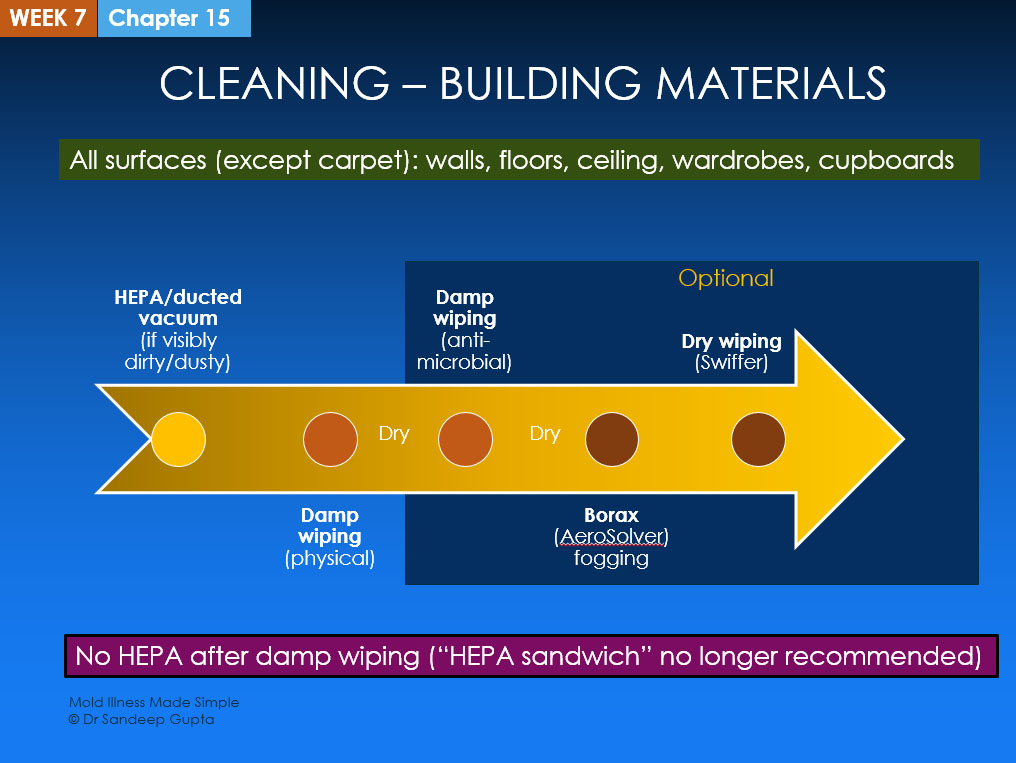 Step 4. Re-test to see if it's safe for re-occupancy

Best practice is for both the remediator and IEP to retest. There’s a couple of catches here; the majority of professionals will re-test using a combination of tape lifts and air sampling not ERMI/HERTSMI-2 and if they/you go that route you’ll have to wait 3-4 weeks for enough dust to collect on surfaces using the Swiffer collection method.

There are several problems with biocide sprays or solutions, such as Exit Mould, chlorine bleach, hydrogen peroxide and more. The main one of course is that they kill mould which we don’t want. Additionally they can be toxic when inhaled and add moisture to the building materials which itself feeds mould growth. Bleach/Exit Mould  (Sodium hypochlorite) only superficially strip away the colour of mould and consumer grade products are rarely in a high enough concentration to actually kill it. None of these will work on porous materials.

Exit Mould received a Choice Shonky award in 2012 for its unsubstantiated claims that it “Kills ingrained mould” and “penetrates porous surfaces to attack mould at the source.”

Ah yes everybody’s favourite. It’s natural so it must be good, right? The use of vinegar, usually diluted to 80% white vinegar / 20% is controversial. The Australian Mould guidelines (2010) and many remediators support its use, and it is at least non toxic compared to bleach. The bottom line is that it’s still an antimicrobial that kills mould.

Clove oil, thieves oil and tea tree oil are popular in the mould community but they are generally not recommended as not only do they kill mould the oil can provide food for future mould growth.

Quaternary ammonium compounds, such as diluted Windex, are recommended by Dr. Shoemaker in his books Surviving Mold and State of the art answers to 500 mold questions. They may have the ability to bind toxins but are considered antimicrobials.

There’s fierce debate in the mould testing, remediation and patient community on the role, if any, of biocides whether hydrogen peroxide, ozone gas, chlorine dioxide, concrobium or any other magic mixture. If they have a place, it’s after mould removal and in place of, or addition to, antimicrobial wiping. Be extremely wary of any remediator who tries to sell a fog or gas as the sole means remediation. From the IICRC 520:

12.2.1 Remediators should not mist or fog disinfectants or sanitizers in an attempt to kill mold in lieu of source removal.

If you’re an CIRS patient, any mould removal should done by someone else, ideally a professional. In fact be out of the house/building while remediation is taking place.

Everyone, patient or not, should use protective gear when removing mould. The CDC recommends at a minimum:

Wear personal protective equipment. Wear an N-95 respirator at a minimum, goggles, and protective gloves. …AFTER YOU LEAVE A MOLD SITE: Protect yourself and loved ones. Shower and change your clothes. This will help you avoid carrying mold and other hazards back to your current living quarters.

IICRC 520
IICRC S520 says numerous times that removal of mould, rather than killing, is required in mold remediation, e.g.

Source removal of mold contamination should always be the primary means of remediation. Indiscriminate use of antimicrobials, coatings, sealants, and cleaning chemicals is not recommended.

Killing or suppressing mold growth will not address the adverse health effects caused by other microbial components such as endotoxins, exotoxins, beta glucans and mannans, among others. It is folly to advocate use of antimicrobial compounds as the “remedial solution” when the inflammagens, toxins and antigens are still present even if the mold itself is “dead.” Removing all toxigens and inflammagens, not simply focusing on killing what is or isn’t alive, is the only route to successful remediation.

Hope, J. (2013). A Review of the Mechanism of Injury and Treatment Approaches for Illness Resulting from Exposure to Water-Damaged Buildings, Mold, and Mycotoxins. The Scientific World Journal
Volume 2013 (2013), Article ID 767482. Link:

A common misperception is that killing mold, which is a relatively easy task, eliminates risk from contaminated environments or items. Unfortunately, this does little to decrease the risk as nonviable fungal spores, fragments, and mycotoxins remain present and, due to their structure, such as with an epoxide ring, [117] they can be extremely difficult to destroy.

While some agencies including the CDC advocate the use of bleach, the EPA in their A Brief Guide to Mold, Moisture, and Your Home in 2016, displayed more common sense:

Biocides are substances that can destroy living organisms. The use of a chemical or biocide that kills organisms such as mold (chlorine bleach, for example) is not recommended as a routine practice during mold cleanup…Dead mold may still cause allergic reactions in some people, so it is not enough to simply kill the mold, it must also be removed.

(but then talk about bleach being used in certain circumstances)

Place mold damaged materials in a plastic bag and discard.
Clean mold off hard surfaces and other nonporous materials with detergent and water, and dry completely.

(but they too then go and and suggest disinfecting with bleach)

NYC Department of Health and Mental Hygiene
Guidelines on Assessment and Remediation of Fungi in Indoor Environments (2008):

Cleaning should be done using a soap or detergent solution. Use the gentlest cleaning method that effectively removes the mold to limit dust generation…Disinfectants are seldom needed to perform an effective remediation because removal of fungal growth remains the most effective way to prevent exposure.

So there you have it, let’s get the right information out in the mould community. Once more with feeling:

Want to learn more about testing and remediation? Enrol in Mold Illness Made Simple 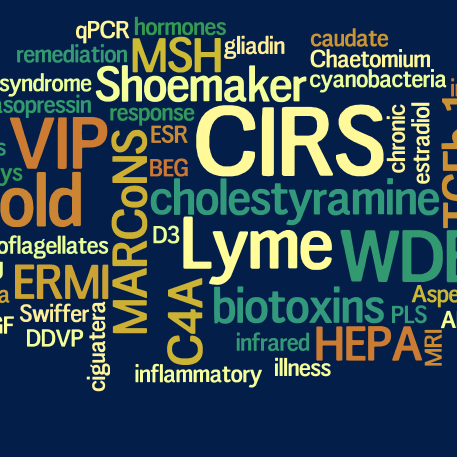 Would you like to learn more about mould remediation and building testing? How about the diagnosis and treatment of CIRS and how Lyme and other tick-borne infections fit into the picture?

Dr. Sandeep Gupta and myself have developed an eight week online course called Mold Illness Made Simple that covers all of these things and more in an easily digestible format. The course has hundreds of slides like the ones above, plus video lectures, high quality PDF workbooks, access to a secret Facebook group and private webinars.

Enrol today and get 10% off the RRP using the coupon

About the Author: Caleb